With the election of Jo Swinson as Liberal Democrat Leader two weeks ago, the Labour Party now finds itself behind the Conservative, Green Party, Plaid , SNP, Sinn Fein, Independent Group and even the DUP in never having had a substantive female leader.

It is unfortunate, that as the party of devolution, we can not point to having had a female Scottish or Welsh First Minister or London Mayor either. Chancellor positions have also only been held by males.

As a party, Labour has contributed 57.8% of all women MPs elected to parliament since 1918; it champions all-women shortlists; 45% of Labour MPs currently in government are women. So why, after all this time, have we still never had a female Labour leader?

All Women Shortlists have undoubtedly been the reason for our success in getting women into Parliament. Without AWS I think it is fair to say we would not have got many of our excellent female MPs into Parliament; these women include Angela Rayner, Rebecca Long-Bailey, Sue Hayman, Cat Smith, Valerie Vaz, Chi Onwurah, Christina Rees, Barbara Keeley and Nia Griffith, Gloria de Piero, Paula Sherriff, Stella Creasy, Rachel Maskell, Jess Phillips, Tulip Siddiq, Holly Lynch, Heidi Alexander, Rupa Huq, Melanie Onn, Thangam Debbonnaire, Maria Eagle, Lilian Greenwood, Kerry McCarthy, Rachel Reeves, Shabana Mahmood and Lisa Nandy. This list makes the dull argument that AWS would lead to mediocre women being selected to make up the numbers hard to support, instead demonstrating that amazing women are often overlooked. In any case there is no shortage of mediocre men in the Commons! It is hard to avoid the argument we would have lost out on this talent without AWS.

If given a choice between a man and a woman members almost always choice a man. Why? An unconscious bias towards men remains within the party membership which must be explored and owned if we are ever to overcome it. If we are truly the party of equality we need to prove it, and be honest about what we are doing wrong.

We can see what happens without AWS in my own constituency. The last time a female candidate was selected was in 1938. Jennie Adamson won the Dartford seat too, that means that almost no one in our town has any memory of it having a female Labour election candidate!

The two women who have come closest to leading he party are Margaret Beckett and Hariet Harman, who were both Deputy Leaders and acting leaders.

Looking at their histories it is hard to see any argument that either were not suitably qualified. Beckett is actually the longest serving female MP ever. She was elected deputy leader of the Labour Party in 1992 under John Smith and when he died in 1994 she became, temporarily, the leader. She then stood for both leader and deputy leader and while Gordon Brown backed her for deputy leader in 1994, she lost out to John Prescott. She held great offices, including Foreign Secretary, but this did not stop her being labelled as a ‘Blair Babe.’ Harman is a QC and served as Shadow Employment Secretary, Shadow Health Secretary and Shadow Social Security Secretary. Despite being leader after Gordon Brown’s resignation she never stood for leader.

Writing for International Women’s Day back in March Harriet Harman summed up the experience of those who speak out about the situation:

‘If you argue for positive action, which the women’s movement in the Labour Party has, then that will be and has been resisted. If you are always pushing at barriers, you’re a productive force, but not necessarily a popular one. Those leading that charge can come to be considered too unpopular for the top job. That is an explanation, but it’s not an excuse.’

There are still men in the party who remain against women in Parliament. For example Veteran MP Austin Mitchell used the occasion of the announcement of his retirement in 2015 to complain that the influx of women MPs had ‘weakened parliament’. The fact a man thought it ok to voice such nonsense in public makes me wonder what else in being said under cover!

However, I do not think Mitchell’s view is typical of that in the party, I think the problem is more that the concept of what a candidate is in intrinsically tied up with imagery of a male for most people. It is easy for women who argue against this to be wanting special treatment.

Now is the time for the decent men in the party to be champions of gender equality, and supporters of the feminist cause. It is no longer enough to leave it to women to fight for equality. It is time for us to look at what processes can ensure this is the last time Leader, Deputy Leader and Chancellor/Shadow Chancellor are all held by men.

I think the time has come to introduce rules that make having three people of the same gender in the three top roles impossible.

Nick Clegg has criticised Corbyn and Labour for “Demonising Austerity” . This will no doubt anger many of us but worryingly it will probably fuel the fire of those that support austerity measures.

He has personified austerity. As if austerity is a defenceless being that has feelings.
So let us take a look at the meaning of the word austerity.

** Spoiler Alert – Austerity is not an actual person **

The truth is that austerity has been falsely used.

True austerity would mean cut backs in all government spending including MPs salaries but that hasn’t happened has it?

Well perhaps they can console themselves that they solved the deficit problem, which surely was the reasons they introduced austerity in the first place? But that hasn’t happened either.

In fact the deficit has increased by 53% (and that is taking into account inflation, otherwise the figure would be much higher). 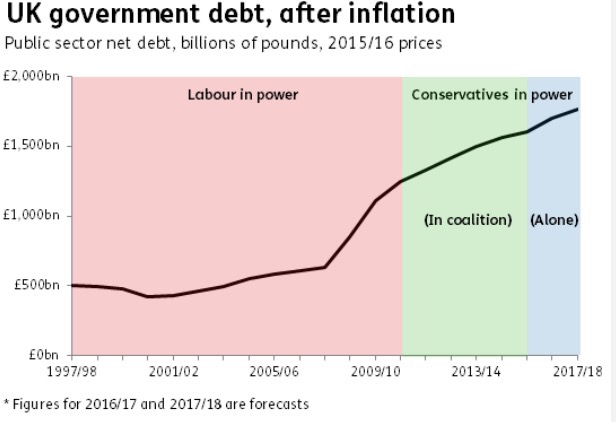 So what exactly has austerity ‘achieved?’
If you can call a 134% increase in homelessness, a rise in the deficit, a pay cap on public sector workers so severe that now 17% of nurses now have to rely on foodbanks an ‘achievement’ then yes it has achieved something.

The biggest ‘badge of honour’ that austerity has achieved is the UN finding that the Human Rights of disabled people has been violated by austerity.  That is surely something to write home about?

If Nick Clegg would like to point out exactly what  positive outcomes austerity has achieved, then I will gladly listen to him. Because I don’t understand how can you ‘demonise’ a severe economic policy that has left millions in poverty.

What about the feelings of families that have to choose between eating and heating? Do their feelings not matter?
Many of those in favour of austerity may cry well how do we deal with the economic problem that we have following the Global Crash of 2008?

Well there is an alternative…

Perhaps we need to think outside of the box that is Neoliberalism, we have afterall been in this situation before.

The Great Depression of 1931 was followed by austerity and a World War that plunged many of the poor into even worse conditions than they were already living in.
Similarly, the Global Crash of 2008 and subsequent recession led to the introduction of austerity measures in 2010, and an increase in poverty.

Has no one learned yet that tightening our belts after an economic crisis does not work?

On the back of the austerity that followed the Depression, Labour Party created the Beveridge Report of 1942, which set out a grand vision of public spending much like the Labour Manifesto of 2017 did. It provided an alternative to austerity and eventually it was accepted and proved very popular. It led to a landslide victory for Labour and the creation of NHS and the Welfare State. After years of austerity and changed the social and economic landscape of the UK for the better and it was just what everyone needed.

So when will we learn from previous mistakes and eventual victories?

Keynesianism is an economic theory that works on the belief that economic demand determines economic output, in other words the more the public are willing and able to spend, the better the economy will perform. And this means investing more into public spending, not less . If the public have more money to spend the economy recovers quickly. If the public are skint and poor, how on earth can they spend anything? It’s quite logical really!

Today we see that austerity has not reduced the debt but that the government are quite happy to spend generously when it suits them with the £1 billion DUP deal, so how long can we live under a false austerity?
The Tories voted against the public sector pay cap only a fortnight ago, flying in the face of hopes of an end to austerity.

The optimist in me however, would like to think that we are on the brink of a radical change for the better and that it is only matter of time before we have a government that rejected austerity.

For now though if Nick Clegg wants to defend and personify austerity then we should treat austerity as a person.

And in that case (Mr or Mrs) Austerity should be punished by the UN for its’ Human Right Violations and stand trial for fraud. It has been lying to us all from that start.